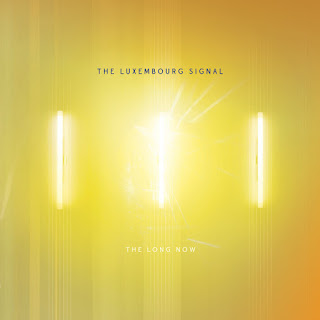 Early last year I was working my way through the musical provenance of the members of jingly-jangly indie-pop merchants Jetstream Pony - an exercise, which I have to say was a rather worthwhile - when The Luxembourg Signal stumbled into view. My subsequent defence for not snaffling their back catalogue - including 2017's epic "Blue Field" - until last year is to trot out my tired old excuse that although it's arguably never been easier to (self) release music - and so many great and diverse artists are indeed launching brilliant records - it has unfortunately never been harder to attract the attention of - what I fear is rapidly becoming a minority - the music buying public…

In the words of that well-known Aussie Poet Laureate, Courtney Barnett; "Sometimes I Sit and Think, and Sometimes I Just Sit", and "The Long Now" is an album that definitely makes you consider the former. The title comes courtesy of a speech given by Brian Eno in which he opined "… The Long Now is the recognition that the precise moment you're in grows out of the past and is a seed for the future. The longer your sense of 'Now', the more past and future it includes…" - which given the car-crash of a year it has been, we should all have had long enough to contemplate upon not only how we got to here, but where we want - need - our future to go.

The first thing to be said is that for a band whose members live in Los Angeles, San Diego and London, must have made the writing and recording process somewhat interesting, is how impressively coherent the album sounds. Eschewing those shoegazy tones of "Blue Field", "The Long Now" instead builds and expands upon the lush, atmospheric audio palette of its predecessor - songs textured with subtle audible hues and washed with generous brushstrokes of cinematic soundscapes - again entwined with the gloriously harmonious vocals of Beth Arzy and Betsy Moyer. 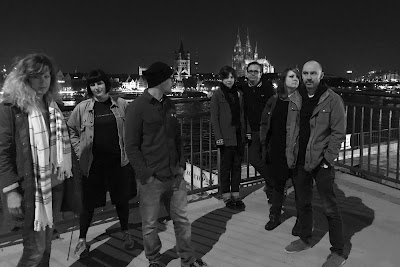 The opening track “I Never Want to Leave” is a deceptively simple composition - built upon analogue synth loops, a little bit of echo - the song's hypnotic repetitive and soothing style is accentuated by those gorgeous harmonised vocals, looping the song's title over and over, suggesting a desire to hold onto a moment for as long as possible. This use of a repetitive vocal hook can also be found on "The Morning After". It's a tune which takes its inspiration from the upbeat, jingly-jangly guitar pop of "Blue Field", as Betsy Moyer's honeyed vocals weave alongside shimmering guitar before the drums kicks-in and the rest of the band joins the fray. There's atmospheric synths, metronomic beat and the most catchy of vocal hooks to die for - one which will be ringing around the increasingly calming space inside your head long after the song has finished.

There's an adrenaline rush of guitars and bass coupled with animated drums that opens “2:22” - coincidently the track's running time - that has had some reviewers compare the song with New Order. There's certainly - to these ears at least - a passing reference, hints from the middle eight of "Ceremony" coupled with the expansiveness of "Crystal", although it has to be said Beth Arzy is a much better singer than Bernard Sumner(!) Gosh this is - as they say - a banger of a tune. There's a gorgeous middle eight where everything slows and Beth's floating vocals literally carry this song, before guitars and percussion kick-in and her voice soars above the vortex of sonic greatness. Similar to the opening track, there's a sense of time - or lack of, attempting to cram everything into a finite period… It's also first time I've ever seen Ebbsfleet appear in a music video!

The concept of time features in both "Take it Back" and "Lost Hearts". The former develops upon the desire to travel back in time and is another beautiful jingle-jangle indie-pop song - guitars, synths and percussion marry with Beth's dreamy harmonious tones - and whose melody and chorus guarantee this will be yet another ear-worming tune from the band. "Lost Heart" revolves around a wrong that time will never heal. Betsy's poignant vocals perfectly capture that mood - somewhere between hurt and resignation; the addition of lush strings adds to the air of melancholy. If "2:22" is a 'banger' then "Lost Heart" is most definitely a smouldering 'slow-burner'…

There's more jingle-jangle guitar indie-pop - this time with a definite mid-eighties bent - and "Cut The Bridle", a song which features Dave Klotz of LA bands Fonda and Dream System 8 on lead vocals, with Beth and Betsy adding the backing harmonies. Synths and drums fill the space, colouring hooks and melodies to produce an expansive, 'cinematic' experience.

There's a noticeable change of mood with both "Elevator Silence" and the haunting "Mourning Moon". "Elevator Silence" is all dark and downbeat synth-pop, full of atmospheric synths and with Beth's hushed vocals adding a hint of melancholy. Reverbed guitar hints at impending finality… in a Morricone kind of way… And finality is the very-much the theme of "Mourning Moon", as it describes dealing with loss of a loved one. Betsy and Beth share vocals in a call and response as synths weave patterns between their vocals

"Ramblin’ Rodriguez" is bright, sparkling indie-pop and full of energy with guitars to the fore and powered by full-bore percussion and some gorgeous multi-tracked harmonies… All of which belies the fatalism of Beth's lyrics and again in contrast to the soaring outro.

The album closes with the anthemic "When All That We hold Decays" and a song which while rooted in those 'lush' AOR anthems much beloved by FM radio here, deliberately avoids the mind-rotting sugar-coating. Beth and Betsy share lead vocals atop a song propelled by guitars and expansive synths, as the lyrics reminds us that life is for but a moment, to be grasped while we can… After the year we've all had, It's a thought worth hanging onto…


Not your average music blog...